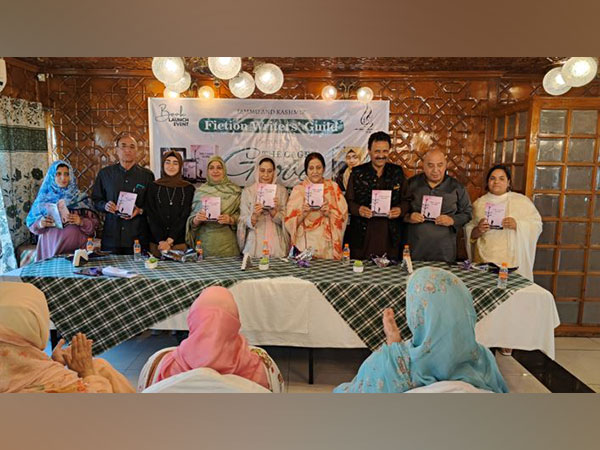 The caged globe, Sadia Nisar Shah's second novel was launched today at a local hotel in Srinagar under the auspices of the Jammu and Kashmir Fiction Writers Guild.

In the beginning, Dr Nilofar Naz Nahvi welcomed all the guests. Before the ritual unveiling of the novel 'The Caged Globe', a commentary written by eminent writer Ezra Mufti was presented by Udin Shabbir, after which the unveiling ceremony was performed. In his presidential speech, Prof. Naseem Shafai congratulated Sadia and expressed happiness that youth in Jammu and Kashmir have started taking interest in literature from an early age.

He said that the Fiction Writers Guild deserves congratulations for guiding other young writers like Sadia.

Expressing his thoughts on this occasion, he congratulated Muhammad Amin Butt, President of Kamraz Literary Center.

He said that the 17-year-old Sadia has inspired other young people by writing two novels at such a young age. While congratulating Sadia and especially her parents, Wahshi Saeed said that we should take the lead in guiding our youth. He appreciated the organizers of the Fiction Writers Guild that the guild is a great platform for young writers.

Many leading personalities including members of the guild participated in the ceremony, while Sadia Nisar's relatives and teachers also joined the event. Rafia Wali performed the duties of the organization.

The event was presided over by eminent writer and educator of Urdu and Kashmiri language Professor Shafiqa Parveen, while former professor of Kashmir University, Professor Naseem Shafai, President of Kamraz Literary Center Muhammad Amin Butt, Chief Editor of Nagina International, Vashish Saeed, and Fiction Writers Guild were present on this occasion. The President of the Women's Wing, Dr Nilufar Naz Nahvi, was also present at the Presidency. (ANI)