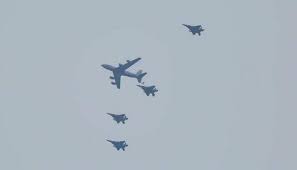 Indian Air Force fighter jets were scrambled to intercept an aircraft with its origin in Iran and headed to China, which was moving towards New Delhi airspace.

According to sources, inputs were received at 9:20 am by Delhi Police about a bomb threat on board a Mahan Air flight headed to Guangzhou in China from Tehran in Iran. It triggered an alert and permission was not granted for the plane to land in Delhi and the plane was instructed by Air Traffic Control (ATC) to divert to Jaipur. Reportedly the pilot refused to divert the plane following which Indian Air Force jets were scrambled to intercept and escort the plane.

The aircraft was headed to China as its final destination, had entered Indian airspace when the alert from Indian Air Traffic Control was shared with the plane. Indian Air Force Su-30MKI fighter jets from Punjab and Jodhpur airbases were scrambled to intercept the plane, sources told ANI.

Data from Filghtradar24 showed the plane reducing altitude over the Delhi-Jaipur airspace for a brief period before it was seen making its way out of Indian airspace.

According to ATC sources, Mahan Air requested for immediate landing at Delhi airport but Delhi ATC directed it to head to Jaipur Airport. The pilots of the Iranian carrier did not do so and eventually left Indian airspace.

The nature of the bomb threat is still unclear.

The plane was seen continuing on its flight path towards China. (ANI)