Ladakh:  The Land of High Passes & Walls of Caves

The scenic beauty, the rugged terrain, the majestic mountains and the challenge of roughing it out, has made Ladakh a favorite with mountaineering enthusiasts 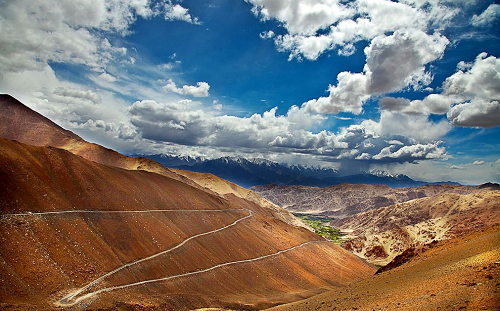 Ladakh or the ‘Land of High Passes’ is a barren yet beautiful region sharing its east border with Tibet and it has Lahaul and Spiti to its south and the Kashmir valley to the West. Strategically placed on ancient trade routes, Ladakh lies between the Kunlun Mountains in the North and the Himalayas in the South. Ladakh was an independent kingdom for nine centuries, but it was very strongly influenced by Tibet and the neighboring Muslim region. Linguistically Ladakhi is very closely related to Tibetan. Tibet has always been where Ladakhi Buddhists would go for higher religious education. The architecture of Ladakh is almost identical to that of Tibet, both of residential buildings and of the monasteries. The class structure, or more precisely the lack of a sharply defined class structure, is common to Tibet and Ladakh and is in sharp contrast to the rest of India. Related to this is relatively high status, freedom, and outspokenness of Buddhist women in Ladakh and Tibet.

The walls of caves in Ladakh tell stories from Neolothic times, when man first made an appearance on earth. Shift to many years later and the people here find a mention in India’s ancient scriptures, the Puranas. Its physical proximity notwithstanding, it has held its distinct geographies and cultivated cultures and traditions that belong to this region alone. Despite the many rulers and invaders, this part of the country has always held its sovereignty and established itself as an independent kingdom. The Indus Valley is the Ladakhi heartland, with the highest population density, and large amounts of agricultural land. Running parallel, roughly north-east south-west with it are a series of valleys and mountain ranges. North of the Indus valley is the Ladakh range, on the other side of which is the Shayok, and Nubra valleys. While a majority of Ladakhis are Tibetan Buddhists the main inhabitants of the region are of Indo-Aryan and Tibetan descent. Shia Muslims are the other inhabitants of the area.

Ladakh is a land of festivals that includes traditional dancing, singing and an explosion of colourful masks. Buddhism has a say here and the visitor can see the strong influence that the religion brings into the many fairs and festivals that are celebrated by its people. Most Ladakhi festivals take place in winters, and the land is replete with various expressions of dance and dramas. The most famous festivals include the Losar festival, Hemis Tsechu festival, Sindhu Ladakh festival and Darshan festival. If you wish to see Ladakh enjoying itself in its splendour and complete abandonment, then planning a trip in winter is a great way to understand its rich and unique culture. The language of Ladakh is Ladakhi, a Tibetan dialect with written Ladakhi being the same as Tibetan. Tibetans can learn Ladakhi easily but Tibetan is difficult to speak for Ladakhis. Spoken Ladakhi is closer to the Tibetan spoken in Western Tibet. Ladakhi language is a shared culture platform which brings the Muslims and Buddhists together as one people of this Himalayan region.

Since Ladakh opened its doors to tourists in the 1970s, its snowcapped peaks, the clear blue skies and the vistas of barren mountains broken only by blue meandering rivers has attracted many an intrepid traveler. Tourism is the main source of livelihood for Ladakh. The scenic beauty, the rugged terrain, the majestic mountains and the challenge of roughing it out, has made Ladakh a favorite with mountaineering enthusiasts. The remote location and high altitude of Ladakh make is unsuitable for those looking for a quick holiday. You will need time to get acclimatized to Ladakh’s weather conditions. However, its natural and rustic splendor has been preserved due to the lack of modernity. Ladakh offers accommodation from family-run establishments to guest houses to budget hotels and rooms in monasteries that are suitable to every budget. However, Leh offers more options for accommodation ranging from guest houses in Changsva to budget hotels near the Central Library and luxury hotels on Old Sheynam Road.Camps and hikers huts are a common feature in Nubra, Changthang and Drokpa area during the summer months. Tourist camps spring up every season in Korzok village too.

Ladakh also offers a wide variety of cuisine from Tibetan to Korean to Chinese to Indian and Continental. These can be found in street-side stalls, restaurants, cafes and garden restaurants. While in Ladakh, do not forget to try the local specialties like Momos, Marchwangan Korma and the local tea made from yak’s butter. Leh is the main town, very picturesque. Majority of population is Buddhist. An excellent base for exploring Ladakh. Good hotels, guest houses and restaurants. Key to accessing the Nubra Valley via Khardong-lha world highest road. Choglamsar - a village with a large Tibetan community, almost close enough to Leh to be a suburb. Kargil is second largest town and the key to accessing the Zanskar area; a necessary stop along the way from Leh to Srinagar and the Vale of Kashmir. A mostly Muslim town with blossoming apricot orchards in the summertime.

Ladakh was a nation where the caravan trade played an important role. Traders from the neighboring Muslim lands (both Kashmir and East Turkistan, now the Xinjiang province of China) were a common sight in Leh's bazaar until the 20th century. The folk music is based on the styles of the Muslim parts of the Western Himalayas; likewise, polo was imported from these lands and enjoys popularity to this day with Ladakhis regardless of faith. The birds migrate from the warmer parts of India to spend the summer in Ladakh. Birds are also, rather predictably, the easiest form of wildlife for tourists to see, and the only thing tourists who don't leave the paved roads, and villages, can be sure to see. For such an arid area, Ladakh may surprise you with the variety of birds, a total of 225 species have been recorded. The Indian redstart and Hoopoe, both summer in Ladakh and are very common. Surprisingly, the Brown-headed Gull is seen in summer on the Indus, and on some lakes of the Changthang. Other migratory water birds include the Brahimini duck, Ruddy Sheldrake, and the Barhead goose.

In Leh there are a number of shops that will rent motorbikes, mostly the Royal Enfield, still made in India today (350 and 500cc model). Rents are fairly cheap, and if you are used to old bikes and left-hand side driving, it is certainly a great way to move around if short of time, and far cheaper than local taxis. Ladakh Autonomous Hill Development Council, Leh was constituted in accordance with the Ladakh Autonomous Hill Development Council Act, 1995. The council came into being with the holding of elections on August 28,1995. The inaugural meeting of the council was held at Leh on September 3,1995. The democratic constitution of the Council has heralded democratic decentralization of planning process with the involvement of people at the grass root level. Owing to the difficult geographical problems, the need for greater public participation in the planning and development process was all the more necessary. Though the concept of Hill Council was first fructified in Leh District in 1995 on the pattern of Darjeeling Hill Development Council, it was introduced in Kargil during the year 2003. The Hill Council is endeavoring to register prompt monitoring of the developmental works by ensuring transparency and accountability in the district administration. Work plans are being made at the grass root level taking the Councilors, Panches and Sarpanches into confidence and are further reviewed at the Block Headquarters in the presence of the Chief Executive Councilor and Executive Councilors.

If not for its cold desert-like climate, Ladakh would have been all the more accessible to tourists. The climate in Ladakh varies from pleasant to extremely challenging. The summers can get a little harsh with direct sunlight falling at such a high altitude. On the other hand, winters can be really cold, with temperatures dropping below freezing point.  Ladakh undergoes the wrath of the winters during these months. Starting from December onwards, the temperature rarely goes above the freezing point. The nights are chilling and temperatures hover around -20°C. Days are still bearable with 2°C as average temperature. January is also the month of maximum snowfall and it is not uncommon to see 6” plus thick ice sheet formations over rivers and lakes. Majority of highways are closed and Ladakh remains practically inaccessible during these months. But still, some adventure junkies manage to go to the area for the much-awaited Chadar Trek on the frozen Zanskar River.

(The author is a regular columnist and can be mailed at m.hanief@gmail.com)

"Walk from Jammu to Lal Chowk, if situation is so good in J&K..." Rahul Gandhi dares Amit Shah