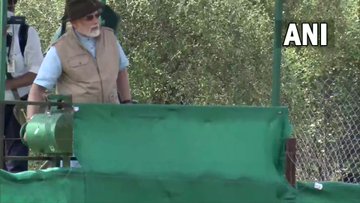 PM Modi released two cheetahs from enclosure number one and after that about 70 meters away, from the second enclosure released another cheetah.

The cheetahs were declared extinct from India in 1952 but today 8 cheetahs (5 females and 3 males) were brought from Africa's Namibia as part of 'Project Cheetah' and the government's efforts to revitalise and diversify the country's wildlife and habitat.

The eight cheetahs were brought in a cargo aircraft in Gwalior as part of an inter-continental cheetah translocation project. Later, the Indian Air Force choppers carried the cheetahs to Kuno National Park from Gwalior Air Force Station.
Radio collars have been installed in all the cheetahs to be monitored through satellite. Apart from this, there is a dedicated monitoring team behind each cheetah who will be monitoring their location for 24 hours.

Cheetahs have been brought under an MoU signed earlier this year.

Cheetahs will help in the restoration of open forest and grassland ecosystems in India and will help conserve biodiversity and enhance the ecosystem services like water security, carbon sequestration and soil moisture conservation.

Earlier, SP Yadav, Project Cheetah chief, "Cheetah is said to be the fastest animal. It runs at a speed of 100-120 km per hour. The habitat that has been selected in Kuno is very beautiful and ideal, where there are large grasslands, small hills, and forests and it is very suitable for cheetahs. Heavy security arrangements have been made in Kuno National Park. Arrangements have been done to prevent poaching activities."

Under the ambitious Project Cheetah of the Indian government, the reintroduction of wild species particularly cheetah was undertaken as per the International Union for Conservation of Nature (IUCN) guidelines.

In continuation of this, the reintroduction of cheetahs is one step ahead and a milestone in the history of wildlife conservation in India. (ANI)