President Droupadi Murmu on Tuesday arrived in Delhi from London after attending the state funeral of Queen Elizabeth II, the longest-serving monarch of the United Kingdom. 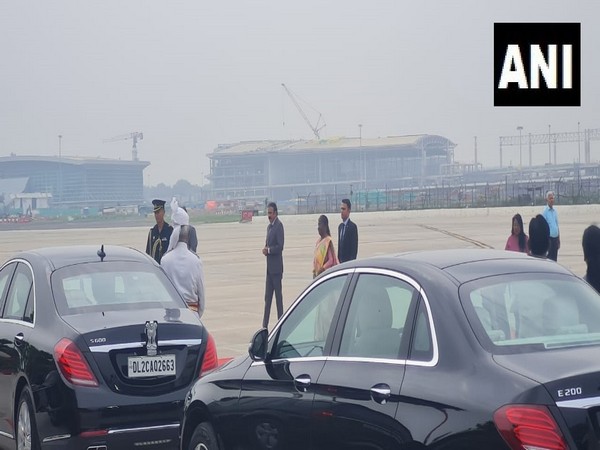 President Droupadi Murmu on Tuesday arrived in Delhi from London after attending the state funeral of Queen Elizabeth II, the longest-serving monarch of the United Kingdom.

She was on a three-day visit to attend the funeral. She was among 500 others from nearly 200 countries and territories present at the funeral, even as a large number of UK residents formed a beeline to pay their last respects to the queen.

The president's plane took off at 8.20 pm local time, few hours after the end of the late Queen's funeral service.
President Murmu was among many world leaders in attendance for the funeral, even as King Charles III and other members of the British royal family walked behind the queen's coffin during the procession.

Crowds watched as the state hearse passed through London, with some throwing flowers in the direction of the convoy.

Murmu was accompanied by foreign secretary Vinay Kwatra during the funeral ceremony.

She concluded her three days visit on Monday and will return to India on Tuesday morning.

Queen Elizabeth II died on September 8 at Balmoral Castle in Scotland. It is the first state funeral in the UK since Winston Churchill's in 1965.

The coffin of Queen Elizabeth II was lowered into Royal Vault at Windsor Castle in London on Monday after the committal service.

World leaders from American President Joe Biden to French President Emmanuel Macron joined members of the public in observing two-minute silence in memory of Queen Elizabeth II as the funeral service ended here with the recitation of "God Save the King", the reworded national anthem today.

The coffin of the longest-serving monarch of the United Kingdom was carried at Westminster Abbey in London with the Royal family members and top world leaders in attendance.

Numerous guests ranging from political heads of countries to distinct royal family members and dignitaries from across the world landed in the UK for the funeral of Queen Elizabeth II.

A state funeral means that the UK government has officially declared the day of the funeral as a bank holiday. President Murmu arrived in London to attend Queen Elizabeth II's state funeral on September 17 and offered condolences on behalf of the government of India. (ANI)