Rangrik: Pitching the Next Spiritual Head of Nyingma Sect of Buddhism

‘All know the way, but very few actually walk it’---Padmasambhav 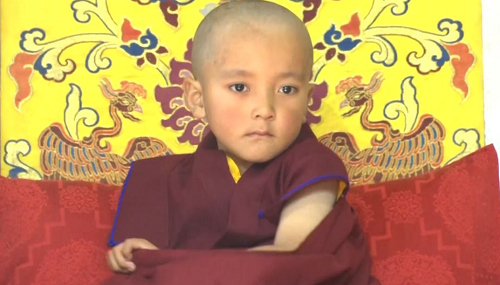 India, a country with heterogeneity in its people, places, flora, fauna, religious affinities and languages spoken is unique in the comity of nations world over. It has taken hundreds of years of close contact of the above facets to yield space to such a unique country like India whose place in this planet of ours flummoxes best of brains to fathom such a complexity, yet such simple to embrace humanity with all its warts. These above mentioned uniqueness in their very being has put India in such an unenviable state that even remote places of the country get catapulted to limelight.

The present write up of mine deals and presents precisely these facets i.e. people, places, and religion all in a heady mix of the trio to its readers. A few days back there was this news clipping in the national dailies of India regarding a 4 years old Tibetan boy ‘Nawang Tashi Rapten’ being enthroned as the head monk(lama) of ‘DorjeDruk’ monastery in Shimla after the monks identified him as the reincarnation of ‘TaklungTsetrulRinpoche’, the supreme head of the ‘Nyingma sect’ of Tibetan Buddhism. The boy belongs to village ‘Rangrik’ near ‘Kaza’ of Spiti and is studying presently in ‘Serkong public school’ Tabo. These twin facts took me back to my days of 1996 when I happen to visit this excellent monastery of ‘Tabo’ in ‘Spiti valley’ on my way to Rupa valley in my service years.

Ordained as the head of ‘DorjeDruk monastery which is affiliated to Nyingma sect of Tibetan Buddhism and considered as one of the oldest schools of thought of Tibetan Buddhism, NawangTashiRapten has been able to suddenly shift the focus by virtue of his selection  to one of the remotest corners of India in Himachal Pradesh. ‘Taklung Rinpoche’ who was the head of the above named monastery at Panthaghati in Shimla died on 24 December 2015 with his body preserved at DorjeDruk monastery for a long time before cremation. His disciples searched hard and long for nearly 06 years for his reincarnation that ended in ‘Spiti valley’ earlier this year when they reached ‘Tabo monastery’.

NawangTashiRapten’ who was born in April 2018 was enrolled in nursery class at the famous ‘Serkong public school’, Tabo this year which is run under the aegis of ISBP&TCS (INSTTUTE OF STUDIES IN BUDDHIST PHILOSOPHY AND TIBETAN CULTURAL SOCIETY).I have had the good fortune of visiting this institute during the millennium celebrations of Tabo monastery in Sep/oct 1996 while at Rupa valley in district Kinnaur and wrote an article too on this world famous monastery with the title ---Tabo monastery-On Route of winds and wool’ and later on an article on this famous school too under the head—‘Schooling the unschooled-Serkong public school’. I never ever imagined that the monks of Nyingma sect will end up at Serkong public school as part of their quest to replace their head lama who had died way back in 2015.

The selection of head of monastery of any Tibetan Buddhism sect is akin to something like that which is undertaken for the selection of a future HH Dalai lama too. Nyingma sect has its main monastery at Shimla going by the name ‘DorjeDruk’aka TDAC Nyingma monastery. It is a famous tourist spot in the city of Shimla. A beautiful Buddhist monastery that displays the prevalence of Tibetan culture in the state and is set in a serene and quiet environment. The monks meditating in the monastery is quite a sight to watch with total peace permeating the ambience. DorjeDruk monastery is being run by the Tibetan exiles who have been in India since 1959, when they came to India along with HH Dalai lama as refugees.

Considered as one of the biggest monasteries of the Nyingma sect in India, this temple monastery was established for the first time by HH KyabjeTaklungTsetrul Rinpoche. He was the head of DorjeDruk monastery at Shimla having been impressed by the DhaulaDharMountains surrounding the area which was picture perfect. As per the Tibetan mythology , all human beings come on this planet with a preordained period and will attain rebirth after death; fatalism tinged with mysticism. In Tibetan mythological scriptures special reincarnation linkages have been identified in Tibet, the most respectful being that of HH Dalai lama. The procedure for identification of the head lama of a monastery involves a very elaborate process which consists of consultingoracles, interpreting visuals and reading spiritual signs.

The senior most monks may find clues from the dead body of previous Dalai Lama, such as direction of the body’s face, and its posture. If the body is cremated, the direction of the smoke is monitored as a potential indication for the direction of the rebirth. Dreams are too an important guide for this quest for search. In case of search for the Dalai Lama’s reincarnation, those involved offer meditation at ‘Lahmo La –Tso an oracle lake in Central Tibet and wait for a vision or insight into the whereabouts of the Dalai Lama’s rebirth. Once these visions and signs have been followed up and a potential child has been found, there is series of tests to verify the rebirth. The child is presented with the artifacts, some of which belonged to the previous Dalai Lama. If the child identifies which object belongs HH Dalai Lama it is taken as a sign of their quest for finding the right successor to the holy seat. The same parameters or template were applied to identify NawangTashiRapten as head of DorjeDruk monastery, that ended the long search of 6 years eventually culminating  at the remote village of ‘Rangrik’ of Spiti valley in HP.

As per the parents of the boy monk, i.e. Sonam Chhopal and Kesang Dolma father and mother respectively, his selection to the highest temporal body of DorjeDruk monastery is both a matter of pride and also tinged with a little sadness and mixed emotions for obvious reasons. The selection of head priest/Lama has suddenly brought the village of Rangrik into limelight which till now was a sleepy place with a laid back life style. Situated at a towering altitude of about 12,139 ft above the Msl ,the village of Rangrik is also known as ‘New Kaza’ since it is just about 8 kms from the district HQs of Kaza. It is located across the R Spiti and is connected by a long 3 kms straight road like an airport runway. Since Rangrik is located close to Kaza, the village has a couple of good schools which attracts students from all over the valley. These schools are situated right at the heart of the village and have boarding facilities for the children too. With the head of DorjeDruk monastery now from Rangrik village, an umbilical cord of commonality has been suddenly erected between Shimla and that of the remote corner of Spiti valley. With every year in the month of May famous ‘Hemis ‘festival of Tibet being celebrated in honour of Guru Padmasambhava, Rangrik’s days of oblivion seem to be fading away fast. As quoted by the Guru himself— “everyone knows the way, but very few walk it’. Rangrik has shown the way to the world and is walking too.

"Walk from Jammu to Lal Chowk, if situation is so good in J&K..." Rahul Gandhi dares Amit Shah