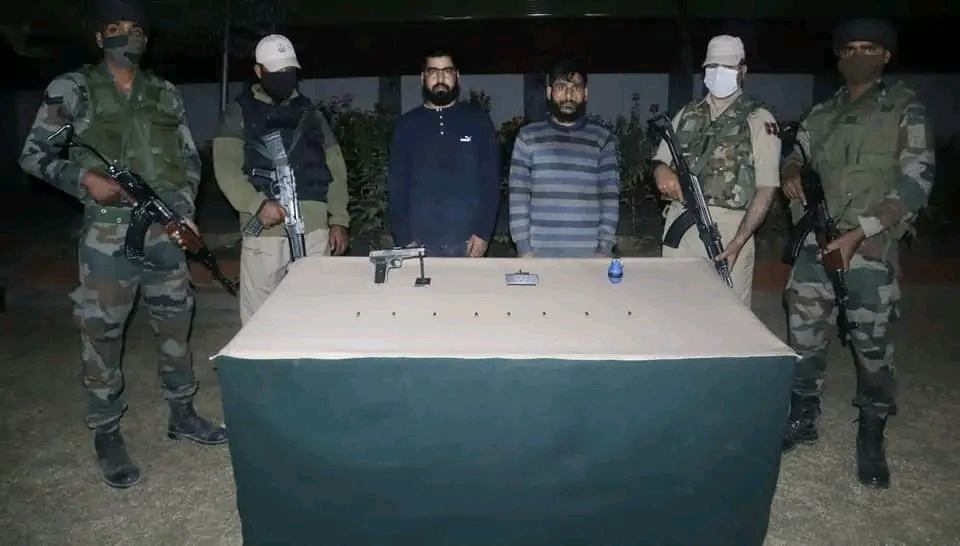 A police spokesman said, "On the basis of a reliable information about the presence of terrorists belonging to proscribed terrorist organization LeT at the village Botingoo a joint CASO was launched by Sopore Police alongwith 22 RR, 179 BN CRPF, Det Marcos and the area was cordoned-off and subsequently search was started. During search, 02 persons within the cordoned area in an orchard were found in a suspicious condition and were apprehended on spot who revealed their names as Imtiyaz Ahmad Ganai S/O Abdul Rahim Ganai R/O Botingoo and Waseem Ahmad Lone S/O Ghulam Rasool Lone R/O Botingoo."

The spokesman said, "Upon their personal search 01 Pistol, 01 Pistol Magazine, 08 Pistol Rounds were recovered from the possession of one Imtiyaz Ahmad Ganai, and 01 Chinese Hand Grenade was recovered from the possession of Waseem Ahmad Lone. During preliminary questioning, the duo revealed that they were working as hybrid terrorist and OGW respectively for the banned terrorist organization LeT and at the behest of active LeT terrorist Bilal Hamza Mir S/O Mohammad Hamza Mir R/O Brath Kalan Sopore were planning to attack security forces and civilians in and around Sopore area."