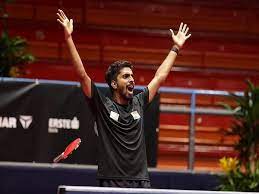 Indian men's table tennis win made a winning start to their campaign at the ongoing World Team Table Tennis Championships in China with a win over Uzbekistan in their first Group 2 match of the tournament on Saturday.

Team India crushed their opponents, gaining a clean sweep of 3-0 in their match. For India, it was Harmeet Desai who started off things in the first game. His opponent was Elmurod Kholikov. Desai got off to a good start, winning the first set, a competitive one by 11-9. Desai followed it with a win by identical margin in set two. In set three, India squashed his Uzbekistan opponent, taking his share of 11 points, while allowing Kholikov to score only one point. Desai won the first game by 3-0.

With this, India gained a 1-0 lead in the match.

Commonwealth Games 2022 medalist Sathiyan Gnanasekaran was next to play for India, with Anorboev Abdulaziz set to face him. Gnanasekaran was off to a fantastic start. India's highest-ranked TT star downed Anorboev in the first set by 11-3. Anorboev got some points on his side in the next set, but the scoreline still read 11-6 in favour of the Indian. In the final set, Uzbekistan was in a tight battle with Gnanasekaran and looked good enough to win it, but Gnanasekaran won it by 11-9.

Yet another Indian won the second game, making things 2-0 in their favour.

The next set was a must-win for Uzbekistan.

Manav Thakkar stepped in to play this set for India, with Iskandarov Shokhrukh as his opponent.

Shokhrukh gave a tough fight to the Indian, making him toil for points. However, the 22-year-old Thakkar kept his composure to win the first set 11-8. Thakkar continued with the momentum gained after a tough but favourable first set, winning the next two sets by 11-5 each.

Thakkar had won his game by 3-0. As a result, Team India won their first match of the world championships by a clean sweep of 3-0.

India will play Germany next in their Group 2 match.

The World Team Table Tennis Championships started in China on September 30 and will go on till October 9. (ANI)